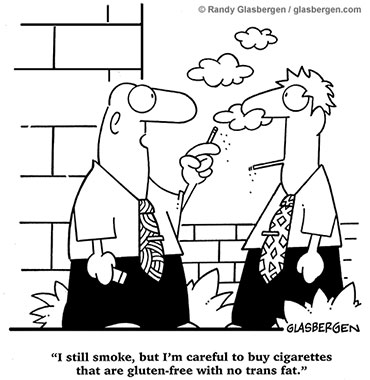 Have you noticed lately how many people are coming down with gluten sensitivity? There seems to be a sudden epidemic of gluten intolerance in the US. You probably know someone who’s told you how much weight they’ve lost since they stopped eating bread.

Gluten is a natural protein found in wheat and other grain products. Some people, a very small number of people by the way, have a genetic disorder that causes an autoimmune response when they eat it. GI symptoms can include stomach ache, bloating, diarrhea, gas, and unexplained weight loss. Gluten sensitivity is a less dramatic form of the more serious problem called celiac disease. Only 1% of the population has celiac disease. About one out of a hundred. That still adds up to a lot of people, but odds are you personally don’t have it.

If it turns out you do have celiac disease or gluten sensitivity, and you stop eating products with gluten in them, you will feel dramatically better very quickly. But people who lose weight on a gluten-free diet are usually incorrect when they self- diagnose themselves as having a gluten sensitivity. What it often means is that they’ve cut out a significant number of calories that used to come from wheat and grain products. When you cut out foods made with wheat like breads and cereals, but also muffins, doughnuts, cookies, Twinkies, and Ding Dong’s you will "naturally" lose weight. That’s because you’re cutting calories, not because you have a sensitivity to wheat products. Besides, whole-grain products like 100% whole wheat bread are an important part of a well-rounded diet and supply important nutrients and fiber that you just can’t get in other food sources. What’s more, the research is clear that consuming whole-grain products that are high in fiber can help you feel more full and actually help you control your calorie intake and lose weight. To cut out an entire food group is not the way to go.

Researchers at Mayo Clinic have found that about 80% of people that are currently on the new gluten-free diet have never been diagnosed with a gluten problem in the first place. But equally important, of that 1% of the population that does have celiac disease, the vast majority of them don’t know they have it. Why? Because they’ve never been tested for it.

Surveys show that many consumers believe that gluten-free foods are healthier and will help them lose weight. The fact is that they’re only healthier for a very, very small number of people. For the rest of us, just because some cakes, cookies, and chips say they are gluten-free does not make them good for you.

The bottom line is that you most likely don’t have celiac disease or gluten sensitivity. Your physician can do a blood test to help find out. However you have to be using some wheat or gluten products for the sensitivity to actually show up during testing. The thing not to do is to go into your physician’s office after you’ve been off of wheat products for several months. The problem won’t show up in the test.

It won’t hurt for you to avoid wheat and grain products for a couple of weeks if you think you might have a sensitivity. If you are bothered with GI problems that go away or vastly improve you may be one of the small minority that, in fact, will do better by avoiding these foods. Your doctor can confirm your suspicion with some tests. But for the vast majority of us, gluten sensitivity is just the latest way for some food manufacturers to sell a lot of higher-priced items in the grocery store. Remember “with oat bran”, “fat-free”, and, most recently, “low-carb” everything? I predict you’ll find a lot of gluten-free items in the clearance section of your supermarket in the very near future.